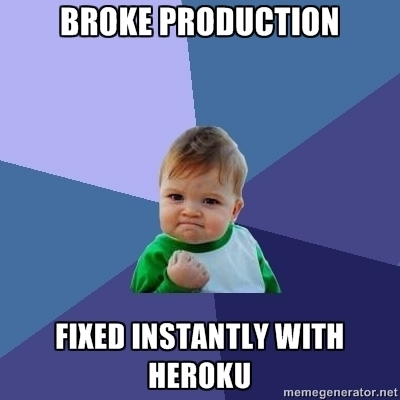 NOTE: Have no idea what Heroku is? I feel sorry for you. You should create an account with them immediately, then come back and read this post!

Today I was working with my new co-worker on one of our company’s Django projects, and after deploying some code, noticed that our New Relic panel was spitting out loads of DatabaseErrors.

The releases add-on gives you an extremely useful rollback command to use, that instantly swaps your deployed Heroku code with the most recent deployed copy. This is a lifesaver. Without the releases application, you have only a few choices available to you should a disaster occur:

All three of those options suck. The releases add-on is a developer safety net, and a good one. Instead of wasting time worrying about stuff, just rollback your Heroku application, and casually debug your application looking for the problems.

In addition to the awesomeness of the simple rollback command, the advanced releases add-on (heroku addons:add releases:advanced gives you even more power: the ability to instantly deploy any revision of code previously deployed to Heroku.

Let’s say you deploy several times before realizing your application is broken, and there is already an army of angry users with pitchforks heading to your Cheeto covered dungeon. 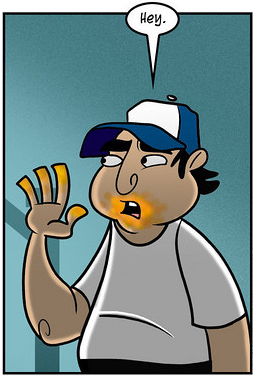 The last thing you want to do is throw on your chain mail, grab your longsword, and fight them off. Let’s face reality here: you’d much rather be watching The IT Crowd and guzzling mountain dew. So instead of going to war, you decide to simply roll back to the last working release.

But wait! Your rollback command isn’t working! You forgot that the last working release was several deployments ago. Damn.

Luckily, you remember that since you’re using the releases add-on, you can simply run heroku releases and view a list of all your previous releases: 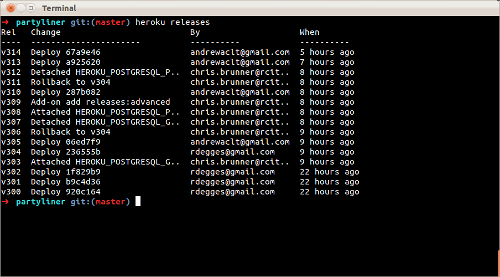 Oh yes, you think. Release v304 was the last working release. Just to confirm, you then run the heroku releases:info v304 command, and after taking a look to make sure, you decide that you’ve found the correct release to rollback to.

To finish your rollback, you simply run heroku rollback v304 and bam, everything is working again. Now you can spend the rest of the afternoon writing a Twilio script that sends text messages to each of your users en-route to your Cheeto dungeon to destroy you, informing them that the problem has been solved, and asking them to return to their lairs.

Whenever you’re working on production projects, problems will arise. Being a developer is no easy task! Luckily for us, Heroku is on our side.

If you’re interested in using the Heroku releases add-on, you should read through the official documentation, it’s really great.

UPDATE: So, I actually wrote a book on Heroku! If you liked this post, you should check it out: http://www.theherokuhackersguide.com/