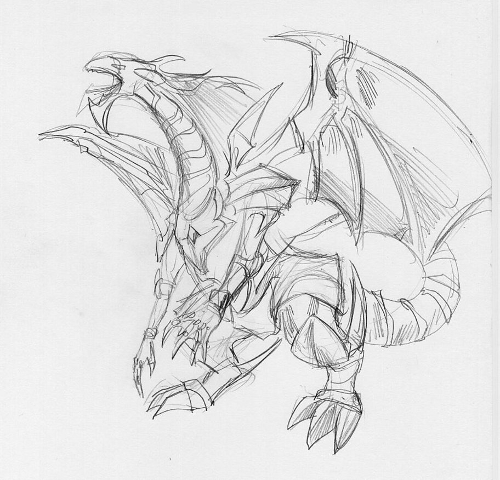 Last week my friend Alven and I launched a new service for developers using PostgreSQL: postgression. postgression is a simple web service that allows you (a programmer) to instantly provision a free PostgreSQL database that automatically disappears after 30 minutes.

Why would you use this? Primarily for testing code: running unit tests, integration tests, etc. It’s handy because using postgression means you don’t need to configure (or even run) PostgreSQL server locally just so you can run some tests.

Since launch, postgression has gotten some decent usage. To date there have been:

While these aren’t huge numbers, we’re seeing consistent usage, which means some developers (whoever you are, thanks!) are using the service to run their unit tests daily.

Since this was a fun project to build (it’s been something I’ve wanted to make for a while now), I figured I’d share how we did it, as some of you may appreciate the technical aspects. From here on out things are going to get technical :)

To build postgression Alven and I used Flask, a popular Python web framework. We ended up using the following Python libraries:

To host our actual API service, as well as power the entire PostgreSQL database back end functionality, we used Heroku (the most awesome hosting platform ever built).

To keep track of our usage statistics and metrics, we used ducksboard, a really awesome company that gives you a dashboard you can customize to your liking (it displays stuff like Google Analytics, custom metrics, etc.). Also: ducksboard was nice enough to give us a free account, as postgression is a free service. If you’re interested in a sexy dashboard for your company (or personal projects), you should check them out!

The Backbone of It All: Heroku

As you can probably imagine (after seeing the tools listed above), Heroku is really the core of postgression, and is what makes the service possible (and affordable!).

After we wrote the initial code for postgression, deploying the entire thing to Heroku (including setting up cron, Redis, and PostgreSQL) took only a few minutes. Big kudos to the Heroku team for rocking so hard.

And since I know many of you will ask, here’s how much it is currently costing us to run postgression, along with a price breakdown:

Total cost for running this service (per month)? ~11$

As I mentioned earlier, we wrote the code for postgression in python and Flask. Why did we choose these technologies? A few reasons:

For instance, here’s the ‘core’ of our Flask app. Note how simple this is, compared to the typically heavy amount of base framework code you’ll find other places. 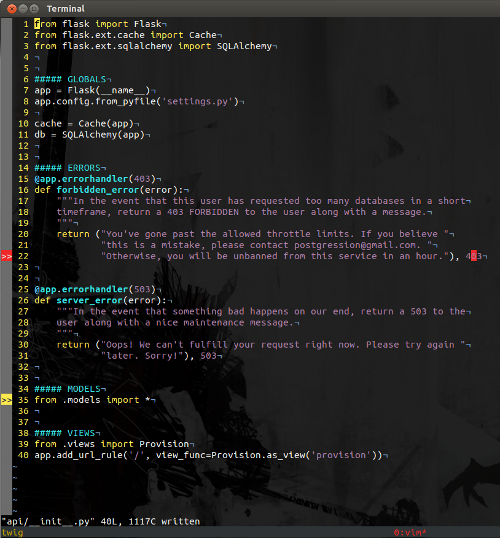 Our view code is equally straightforward, and our models aren’t too bad either :)

Here’s how the API logic works:

In the background, we have a cron job running every 10 minutes which de-provisions any Heroku PostgreSQL databases that were created 30 minutes ago (or more) using Heroku’s API.

Simple, right? When it all comes together, we get the following behavior (screenshot below).

To make all that work, we used Flask-SQLAlchemy to define two simple database models:

Here’s how they ended up looking: 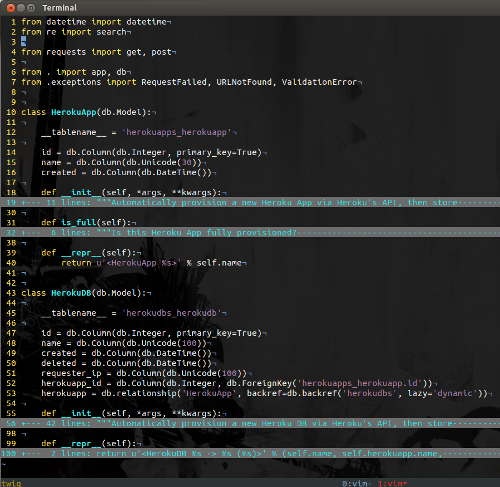 In order to automatically send statistics to our shiny new ducksboard dashboard (pictured below), we used Flask-Script to write some simple management commands that are ran automatically by the Heroku Scheduler every 10 minutes. 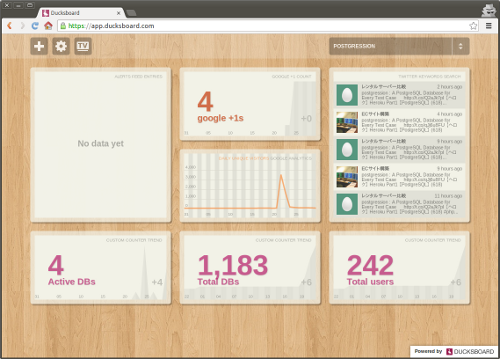 Writing the cron tasks using Flask-Script is really simple, and makes running automated tasks a breeze. Below are a couple of the tasks (screenshot), which we can run with the python manage.py blah command. 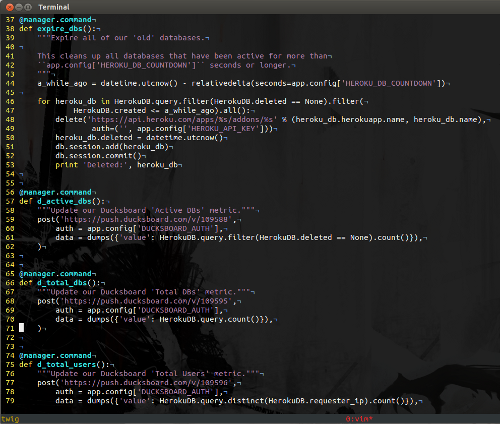 Essentially what we did was put all our documentation (in Markdown format) into our project’s README.md. Then, using the ‘Automatic Page Generator’ (available under your GitHub repository settings), we imported our README file, picked a theme, and published the site.

After it was published, I made some small tweaks, but nothing too big.

The end result? We got the public website going (http://www.postgression.com/) in about 10 minutes.

Building postgression has been really fun. While it’s not a complex project by any means, it’s been on my TODO list for a while, and throwing it online has been an interesting experience.

Both Alven and I are constantly amazed by:

I’d also like to give one last shout out to all the Heroku guys (and gals). They’ve built an amazing service, and allowed me to build an entire Database-Testing-as-a-Service API on top of their platform for almost no cost.

If you’re interested in postgression at all, be sure to give it a go and check out our website: http://www.postgression.com/

If you’d like to know more about postgression, feel free to leave a comment or shoot me an email (r@rdegges.com).