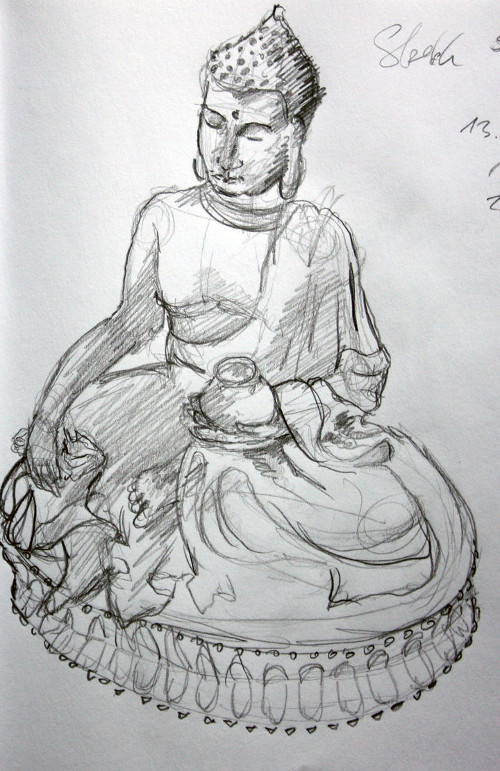 A few days ago I wrote an article about being positive that ended up getting quite popular and generating a lot of reader email. Since then, I’ve had the pleasure of chatting with numerous interesting people about positivity, personal development, and the tremendous effect they can have on a person.

One thing I heard from many people, however, was that they’ve been working on maintaining a positive attitude, but they find it hard not get angry and frustrated frequently. I figured that since so many people were having the same problem, I’d use this article as an opportunity to share a story which really changed my outlook on being positive.

Before I begin, I’d like to quickly note that I’m not in any way religious, but the story below contains quite a few truths.

One of my favorite historical figures is Siddhattha Buddha. If you’ve never read about his life, it’s one of the more interesting historical tails, and quite different from the mystical stories you find at the root of most religions.

While you can read many of his stories online, I’ve copied one of my favorites below:

Buddha was walking into the city market one day, and near the city entrance an old bitter man was sitting on a box glaring at Buddha, who carried a bright smile on his face. At the sight of him the old man started cursing Buddha, telling him how pretentious he was, how much better he thought he was and how he was not worth of the air he breathed. But Buddha simply smiled and kept walking to the market to get what he needed.

The next day Buddha returned to the market and once again the old man was there, and this time his cursing intensified, screaming and yelling at Buddha as he walked by, cursing his mother, father and everyone else in his life.

This went on for the rest of the week, and finally as the Buddha was leaving the market the man came up to him, as his curiosity had gotten the best of him. “Buddha, every day you come here smiling and every day I curse your name, I curse your family, and I curse everything you believe in”, the old man said. “But every day you enter this city with a smile knowing that I await you with my harsh tongue, and everyday you leave through the same entrance with the same smile. I know by speaking to you now that you are not deaf, so why do you keep on smiling while I do nothing but scream the worst things I can think of to your face?”

Buddha, with the same smile still on his face, looked at the old man and asked, “If I were to bring you a gift tomorrow morning wrapped in a beautiful box, would you accept it?“, to which the old man replied, “Absolutely not, I would take nothing from the likes of you!“. “Ah ha”, the Buddha replied, “Well if I were to offer you this gift and you were to refuse, then who would this gift belong to?“. “It would still belong to you, of course”, answered the old man. “And so the same goes with your anger, when I choose not to accept your gift of anger, does it not then remain your own?”

I think there is an important lesson to be learned from this story: your emotions can be controlled, and you have the ability to choose your feelings.

Maintaining a positive attitude can be challenging, especially when most people are typically surrounded by negativity at all times:

There is truly an unlimited supply of negativity in the world, which makes it all the easier to go with the flow, and get stuck in an always frustrated or angry mentality.

Did someone say something behind your back at work which made you angry? Did a driver swerve into your lane forcing you to slam your brakes to avoid a collision?

While you can never escape negative situations, there is always a way to escape needlessly negative behavior and mindsets. Your can control your emotion by changing your perspective.

In the story above, although the Buddha was being screamed at viciously, he never allowed himself to accept the anger of the old man. The Buddha knew that while he could certainly allow himself to get frustrated over this situation he couldn’t control – what good would that do? Would getting angry at the old man help the Buddha in any way? Would it make him feel better?

Instead of instinctively reacting to a negative situation with negativity, the Buddha consciously made a decision to not accept the old man’s anger. Instead, he changed his perspective on the situation, thereby changing the outcome.

By changing your perspective of yourself, you can actively change your feelings. Instead of viewing yourself as a victim of your environment, view yourself as the master of your environment. This means that while most people tend to get instinctively pulled into feeling one way or another, a mindful person will analyze their thoughts and actions, and make whichever decision is best for themselves at the time.

One of the best ways to change your attitude over the long term is to consciously react to situations after thinking things through.

Change your perspective of yourself, and you can change your very nature.